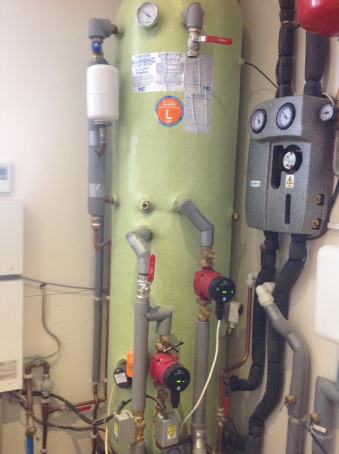 There's lots of talk about storage of electrical energy at present, and you may even have read some of our blogs on this topic in our 'What's Watt' series. But one of the oldest methods of energy storage is thermal storage. Until recently most households had a thermal energy storage device, they called it a hot water cylinder and it was found in the airing cupboard!

I say until recently, as over the last decade traditional hot water systems have been replaced by 'combination boilers' or 'combis' as they are known to most people. This is a shame because it is much harder to integrate Solar thermal or solar PV technologies if you don't have a hot water cylinder.

Although there are certain advantages to having a combi boiler in small homes, they are not considered to have a potential for energy storage. A cylinder can be 'charged' with heat in the same way a battery can be charged with electrical current. Lets consider this important fact for a moment because without this feature solar thermal could not work. Without some form of thermal storage you would only get hot water if the moment you turned on the tap the sun was shining strongly. You would also waste the 'preheat' energy available in spring and autumn. Pre heat is using renewables to raise the temperature of water in the cylinder by just a few degrees, leaving less work for the non renewable heating to do in order to raise the temperature further (usually to 65 degrees C)

You can also use Solar PV panels to heat water, though it is more efficient to use solar thermal for this purpose – Using Solar PV does make financial sense. If you are being paid for what you generate, and your export amount is assumed then using surplus electrical energy to heat water will save you money through 'self use' . The key to making this work is using a device to sense when you are 'exporting' (your generation exceeds your use). The device will then switch on your immersion heater to use the surplus energy. If you have your immersion at the mid position or at the bottom of your cylinder you can make use of more surplus energy than if it is at the top. The reason for this is that the higher up the cylinder you go the warmer the water is. Immersion heaters usually turn off at 65 degrees C, so an immersion at the top of the cylinder may only be able to heat 70 litres of water. One at the bottom will be able to heat the full 210 litres.

A hot water cylinder is a good way of integrating several renewable technologies, you could have inputs for a wood burning stove, solar thermal, immersion heater (powered by solar or wind) or a heat pump for example. Water for washing and bathing would pass through the volume of water in the store via a heat exchanger. The same volume of water could also be used to 'power' radiators and underfloor heating (if there was sufficient volume).

So how much energy can you store?

It takes 4187Joules of energy to heat a litre of water by 1 degree (specific heat capacity). So if you heat a litre of water from 10 to 20 degrees you would need 41,870 Joules. That might not sound much but remember that figure is per litre. If our store was 500 litres capacity then we would have 20,935,000 Joules. If we raise the temperature further then there is more energy in the cylinder. Storing at 50 degrees would give 83,740,000Joules.

Now as usual when talking about power and energy you have to factor in time too. The reason for this is that 1 Watt = 1 Joule per second. We can work out that our store of 83,740,000Joules would run an 11kW heat load for 2 hours (theoretically). I say theoretically because that assumes that the heat load can handle low grade heat, realistically a radiator system is not going to work much below 35 degrees flow temperature. A radiator sized to operate at this temperature would have a very large surface area and may not be practical. A standard radiator would need up to 72 degrees C flow temperature, the return temp would be 50 degrees C. That's a temp difference of 22 degrees (4187joules x 22 x 500litres) = 46,057,000 Joules, enough to run our 11kW load for 1.16 hours. If you are thinking of using thermal stores you must do the sums very carefully and if you are thinking of using the store for space heating then look to use the lowest flow temperature that you can, for instance underfloor heating can run at 35 degrees C