We were approached by Nannerch primary School North Wales to design a small off grid power supply for a remote classroom that the school had built for the pupils to learn about horticulture.

Having assessed the cost of getting a mains cable to the building it was found to be comparable to the cost of an off grid set up, also running a mains cable would involve trenching work to lay the cable which would not have been easy. Another benefit to the pupils in going off grid would be that they could learn about renewable alternative electricity generation.

The classroom is to be used all year round so some form of heating had to be considered. The classroom is well insulated and not very large measuring approximately 4 x 4 meters. It was decided for economical and health & safety reasons that a small electric fan heater would be used to keep the chill off during the colder months. 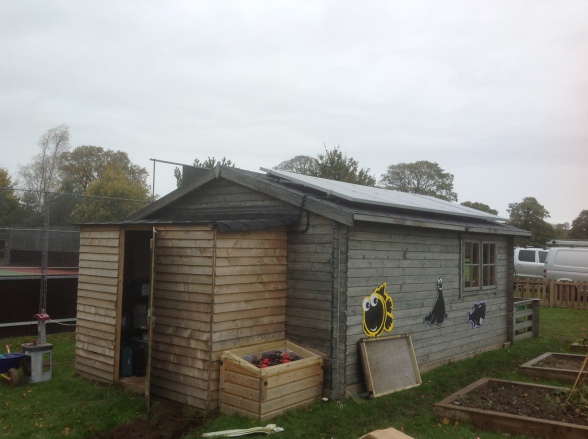 We decided to opt for a wind/solar PV hybrid system to harness as much renewable energy as possible. We could fit a maximum of 5 panels on the South facing roof giving a output of 1.25kWp. The wind turbine (which we donated to the project) is a 300W 12V model to be mounted 4 meters away from the rear of the building.

Having decided on the renewable generation equipment we then needed to work out what size inverter charger and battery bank would be needed to meet the demand. We decided to keep the DC system at 12V and proposed the use of a SMA Sunny Island inverter/charger with an output of 2.2kW coupled with a SMA Sunny Boy 1200W inverter.

The wind turbine would be coupled on the DC side of the system using a small dump load to take care of any excess generation. The batteries chosen were 4 x Rolls Solar 6V 530 Amp Hour to be connected in series then paralleled up to give a 12V supply with a capacity of 1060 Amp hours.

Fortunately the rear of the classroom has a shed for the storage of tools and other equipment that the pupils use; this building also had enough room for us to install both inverters and all the switch gear. A separate insulated battery enclosure was installed next to the shed to house the batteries. Foundations for the wind turbine were laid with a small trench leading back to the shed for connection. The PV panels were mounted on the roof and connected to the Sunny Boy through a DC isolator, then the inverter/charger and other equipment was then installed and the whole system was earthed correctly.

We then erected the wind turbine and made all the necessary connections on the DC side and tested accordingly. The SMA Sunny Island gives a 230VAC output to the classroom feeding a small RCD protected consumer unit, this then feeds 6 x LED lights and 1 x double socket. 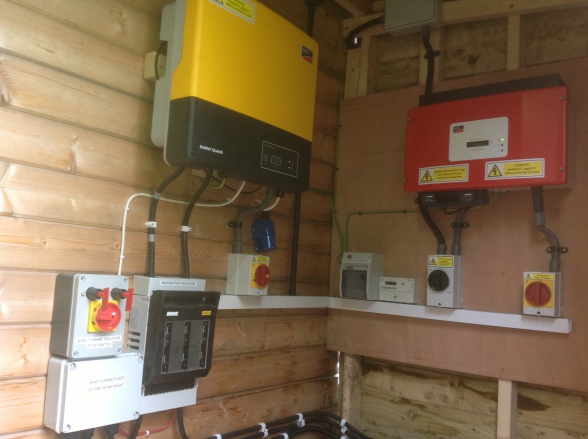 As part of the educational side of the project we also designed interpretation boards which clearly demonstrate to the pupils how the whole system works.