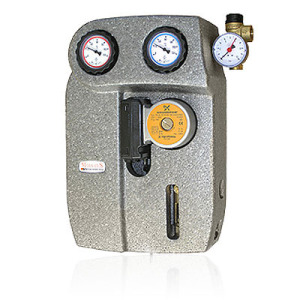 There's a slight pun in the title, under pressure can mean being held at a pressure greater than atmospheric, or it can mean a state below the desired pressure – my bicycle tyre is a bit under pressure!

Both definitions are relevant in relating to solar thermal systems in the UK. Firstly to address why the sealed system should be pressurised. Not to be overlooked is the fact that if a system is pressurised you can look at a pressure gauge and see if there is a problem. Problems with the solar fluid will show up as a drop in pressure when measured cold. Temperature is important, pressure is related to temperature and you should always look at the pressure twice, once when cold and once later in the day when the system has heated up. If you have a reading of zero when the system is working then there is a problem.

The main reason for having a pressurised system is related to the boiling point of the working fluid. Glycol based solar fluid has a slightly lower boiling point that plain water. Having solar fluid boil can cause a failure of the system, or cause the pressure relief valve to operate – discharging the solar fluid and making the problem worse!

The boiling point of a fluid is related to pressure – the higher the pressure the higher the boiling point. This was famously why explorers could not get a good cup of tea at the top of Everest (where the atmospheric pressure is lower) In this case the water was boiling at a temperature lower that was required to diffuse the tea!

Back to solar thermal (after our tea break). At atmospheric pressure (indicated as '0' on a pressure gauge) the glycol based fluid may boil at a lower temperature than the working temperature of the system. To stop it boiling we can pressurise to 1 bar, for higher temperature systems we could pressurise at 2 bar. So why not just continue upping the pressure and increase the safety margin of the system?

Well, as we get close to 5 bar, thermal expansion effects my drive the system close to the 6bar operating condition of the discharge valve. This may cause the system to discharge unnecessarily under normal temperature ranges. It would also be quite difficult to pressurise to 5 bar with normal installation equipment.

So there we have it - a little pressure can be a good thing!