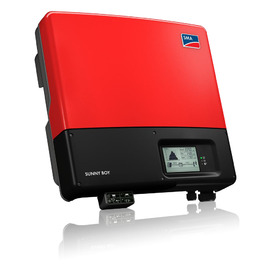 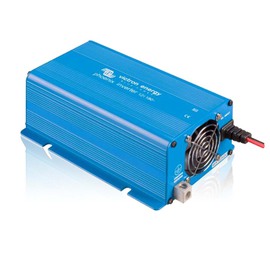 For our purposes an inverter is part of a solar PV system. You will also see the term inverter used for electrical equipment that drives electric motors in vehicles or compressors for heat pumps. Essentially in our example an inverter converts DC electrical power into AC electrical power and usually 'steps up' the voltage along the way. In 'Grid tie' systems (connected to the 'grid') they also perform a safety function preventing de- energised sections of mains cable becoming live unexpectedly, this function is known as 'anti islanding' and is little more than an automatic switch.

The anti-islanding feature means that if you have a grid tied solar PV system you suffer from power cuts in exactly the same way as your neighbours – even if the sun is shining!

Off grid systems often combine the inverter with a battery charger as one package. The actual off grid inverter uses the same principles as the grid tied version but does not have to monitor the grid, or provide anti islanding protection.

The easiest way to understand what’s going on is to think in terms of electrical power, or one step further just consider energy. Whatever energy you put into a system you must get out in some form or other - energy can be neither created or destroyed (just converted from one form to another). So back to our example 24 volts DC at 25A = 600W. For our purposes we'll assume near 100% efficiency so...

Look at those two figures again for a moment and you will see that what we have gained in Voltage we have lost in Amps – the energy is the same.

The other 'trick' performed by the inverter is to turn DC to AC. In order to do this you must first 'pulse' the DC (switching on and off very quickly) this is what's known as a 'square wave' and was a characteristic of early inverters. In the early inverters the square wave could be put through a transformer (A device for stepping up or stepping down AC voltage) and the voltage that emerged would be the mains voltage. In modern inverters this is done using power electronics and means a reduction in weight and size of the unit. It also means a better quality of AC output and less likelihood of electrical interference with other devices.

In grid tie systems high voltage is more important than high current so the DC side tends to be at 300V or above, but only 8 Amps. The control electronics inside the inverter will always try to combine the voltage and current in the most efficient way. This feature is known as 'maximum power point tracking'(MPPT). Inverters may have two MPPT's and this means that two 'strings' of PV modules can be connected. This feature is useful if you have a roof that is split over east and west aspects, or you have areas of the PV array that are likely to be shaded.

The inverters that we have talked about so far are physically large. There are also 'Micro Inverters' and these fit behind the PV modules and do all the conversion work on the roof. Because there is one inverter per module (sometimes one between two) you have multiple MPPT's so there is the potential to squeeze that little bit more out of an awkward roof or a partially shaded array. Not to be confused with micro inverters are 'optimisers', these also fit behind the PV module and I'll cover those in another article.

One final point to note - inverters are most efficient when working close to their maximum rated input conditions. There is no advantage to oversizing an inverter, even if there are plans to expand the solar array in the future. It is always better just to add another inverter when the time comes to increase the number of solar PV modules in the array.

Hopefully that has 'demystified' inverters a little