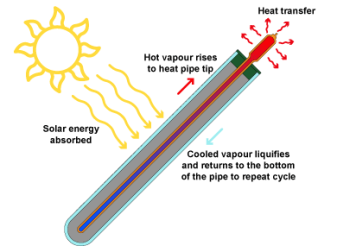 Firstly let me just say that solar thermal is a reliable low maintenance technology, but like anything things wear out, or the homeowner discovers a problem, the list of common faults below is based on my experience of over 100 solar thermal systems.

1 - Pump running but the cylinder isn't getting hot, collector is hot though.

I've encountered this one a lot; it’s a flow issue, but not always a pump problem. The collector is doing its job and the controller is working. The thing to check is the pressure. If the pressure is very low or zero then it is likely that some of the heat transfer fluid is missing. Before any suggestion of a pump replacement the system should be tested by a competent person. Filling with air first will reveal if there is a more fundamental problem (and won't flood the loft!). Once checked for leaks, the system can be refilled with fluid. With the air bled from the system, and the pressure set to 1bar the job is complete.

2 - Solar thermal never seems to come on even when it’s sunny, frost function on controller runs quite often in cold weather.

This is perhaps the silliest reason for a solar thermal malfunction, but it can be an expensive repair. Checking the controller will reveal that the collector temperature is the same as the outdoor temperature. This is because the sensor in the collector has been pulled out by a bird!

The expensive and correct way to repair is to hire a scaffold tower to safely access the collector (assuming that it is roof mounted). If you are prepared to accept a lower efficiency (but still better that no solar thermal at all) the sensor can usually be pulled back in through the roof and secured to the flow pipe from the collector. It is important to mount the sensor as close to the roof as possible and use a jubilee clip with heat conductive paste.

Usually this is a problem with the expansion vessel, if the vessel is tapped lightly and doesn't have a ringing sound (when the system is cold) it is likely to have failed. With nowhere for the expanding solar fluid to go the system safety device (pressure relief valve) operates. Where the pressure relief valve is mounted on the roof you may even see steam coming out!

Eventually the valve will fail and stick in the open position, and it's this that prevents the system holding its pressure.

4 - Pump runs but there is no flow collector gets very hot, cylinder stays cool.

If all air has been removed from the system, and it is holding its pressure, then the pump must be suspect. Early installations used ordinary domestic heating pumps. In some circumstances, with extremely hot fluid in the system the pump can fail. The aluminium impeller (rotor) on these pumps becomes softened at 100 degrees and begins to slip on its spindle. Eventually the pump motor spins but the impeller remains stationary – hence no flow in the system.

Those four are the most common ones that I have encountered on standard domestic systems. The rest of the faults are usually related to the controller or sensors. Some are too obvious to mention here such as leaks and blown fuses!