Solar Thermal - How does air get into a sealed system? 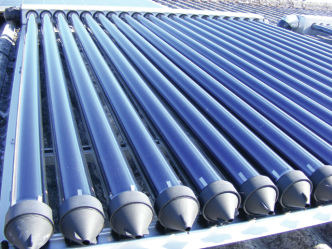 This is the question I am often asked after diagnosing a problem with a solar thermal or other 'sealed system'. Air is present in water as tiny bubbles so it is very difficult to make a system air free to start with, and air is present in the pipes before they are filled when the system is commissioned. Placing bleed points in the system at the highest point allows trapped air to be released and this usually gets rid of air at the early stages. Changes in pressure can release air from the water and cause bubbles, a reduction in pressure can also cause air to be sucked in through faulty connections or failed components (such as the bleed points that have been installed to reduce the problem at the outset!).

This can be the case with solar thermal systems pressurised to 2 bar. In a typical scenario there is no demand for hot water and the cylinder is up to temperature, the solar thermal system gets hotter and hotter until the pressure release valve operates, not only does this lead to a loss of fluid but also a loss of pressure. This can cause the remaining fluid to boil, or for air to be released from the fluid.

Think of a fizzy drink, remove the cap of the bottle and it 'fizzes' releasing bubbles of carbon dioxide that had been trapped in solution under pressure until that moment and you have the picture. When the system cools again the bubbles remain, not only that but there may now be a negative pressure in the system causing outside air to be drawn in through any weak points in the system (often the pressure relief valve not closing properly) the result of this can be a complete failure of the system caused by the air reaching the circulator pump. Once air is lodged in the pump no fluid can move through the pipework, there is no heat exchange at the cylinder, the collector gets hotter, the remaining fluid boils, the pressure relief valve operates and more air becomes trapped in the system.

In theory it should be easy to remove the air, but it can get trapped where pipework changes direction or in the ridges of flexible 'DN' stainless steel pipework and the impeller of the pump. With systems that use the ridged flexible pipework the only way is to refill and flush through for at least 30 minutes.