In part 1 of our Living both on and off grid series we mentioned the importance of insulation when creating an efficient eco home, this is especially important when choosing an Air Source heat pump as they work on lower temperatures than standard gas or oil heating but run for longer at these lower temperatures maintaining the house at a constant pre-programmed temperature, this means they have to work a lot harder and run a lot longer if the house is badly insulated. It is possible to have a heat pump in a home which hasn’t got that good insulation but it means the heat pump has to be upped in size, a detailed heat loss should always be carried out to determine what size heat pump is needed and in the case of a house which is not suitable for this type of heating it will show up in the calculations. Air source heat pumps work by absorbing heat from the outside air in the same way that a fridge extracts heat from its inside, you could argue that heat pumps are not exactly renewable as they use electricity to run however the heat they extract from the ground, air, or water is constantly being renewed naturally and they are the most efficient way of using electricity for heating as they can typically produce 3kWs of heat for every 1kW of electricity used. You may wonder how they can get heat from the outside air on cold days but heat pumps can extract heat from the air even when the temperature is as low as -15° C. We use an 8.5kW Mitsubishi Ecodan heat pump and it heats both our underfloor heating, upstairs radiators and hot water. 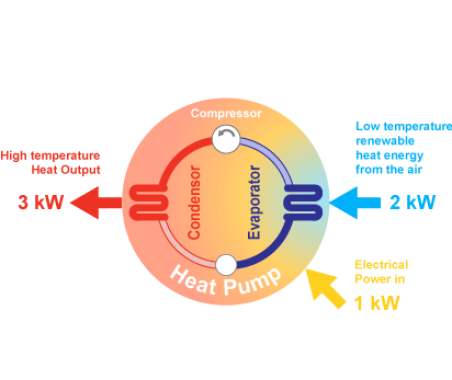 One thing to note about heat pumps is they are not suitable for homes with no grid connection, we have one on our property as we are only off grid part of the time and we have connected the air source so that it is separate to the off grid/battery back-up system and constantly connected to the grid. This does mean that in the event of a power cut we would be without the heat pump however we would still have our 9kw wood burning stove with back boiler for hot water and space heating, if it was too warm for the stove in the spring/summer months we would then have solar heated water from our 5.5kWth solar thermal evacuated tube array, so we shouldn’t suffer too badly! 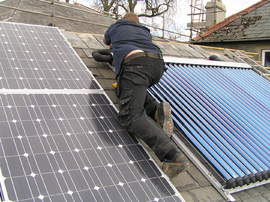 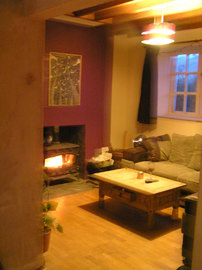 We did get to put the system to the test after the 2012 storms as we were without mains electric for 3 days, it was February so the solar gains for the PV and thermal hot water systems were minimum however we had the back-up generator. We had the system running automatically so that the generator would be brought on whenever the battery bank got low, we used the stove for heat and hot water and the batteries for lighting, fridge, freezer, washing machine etc.  So inside the house you wouldn’t of even known there was a power cut! We’ll go through the PV/battery backup side of the system in more detail in the next blog. For cooking we went with a LPG gas cooker as this is always the best option if you plan to run your home off the grid for any length of time.

One thing to mention when going for an energy efficient system like ours is the importance of sizing the thermal store correctly, the thermal store is the central tank or cylinder where all the heat you’re going to produce from any solar thermal, log burner or heat pump is going to go so get this wrong and you’ll have problems; if the tanks too big for your renewable capacity you’re not going to have enough output to heat the tank conversely if  your tanks too small you’ll have problems getting rid of the heat produced. You can read more about the sizing thermal stores in our What's Watt blog

We have a 450ltr thermal store which is quiet large for our house size but we have maximised the roof space and filled it with PV and solar thermal so we needed a large tank, we also make use of an immersun unit which feeds any ‘spare’ electricity being generated from the PV system and automatically switches on the immersion heater on the thermal store. Immersun units work fantastic with PV systems as it means you can benefit from hot water as well as electricity, we have ours set to heat up the top of the tank first just make it more likely that there’s always hot water available. 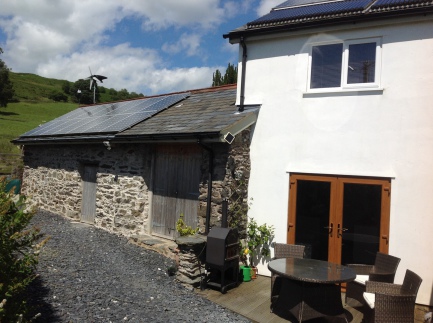 As you can see there’s a lot to think about when designing a house which can run both on and off grid and the best advice we can give is to spend time at the beginning getting heat loss and projected electricity consumption calculations correct this will be time well spent as should save you from any future problems that may arise.

In part 3 we’ll go through the electric side of the system – PV, Battery back-up and back-up generator and how to integrate the different renewable technologies to make the most out of your system.